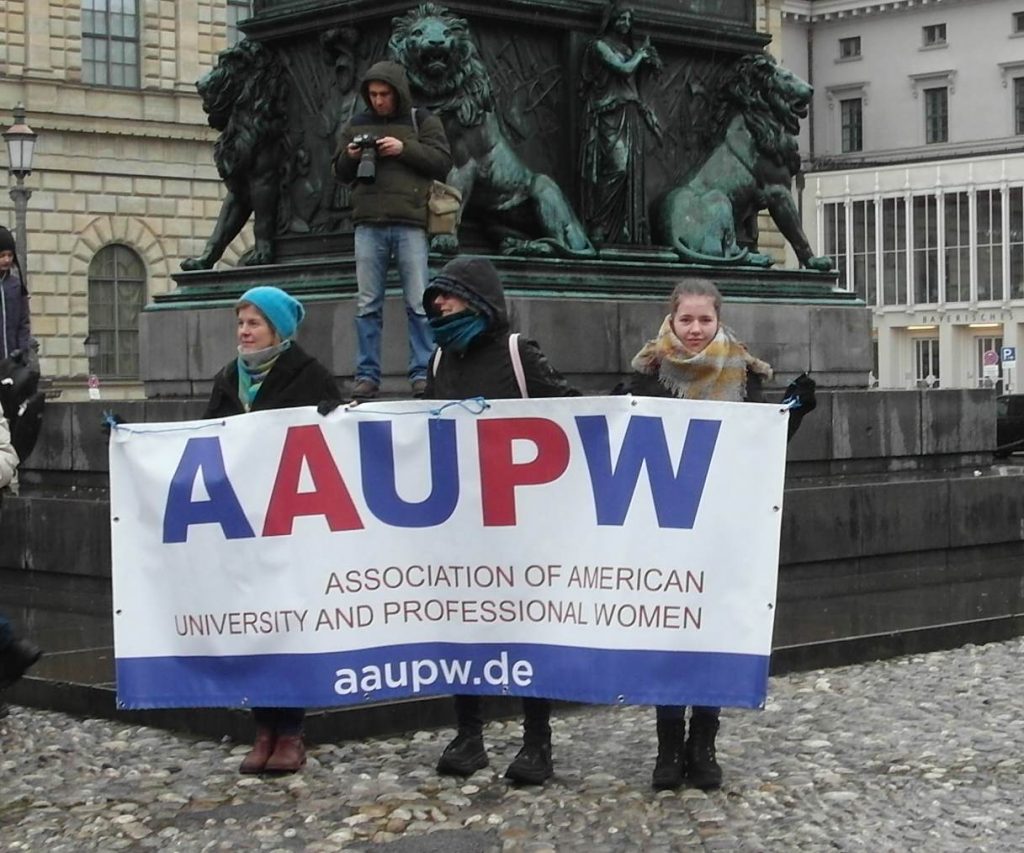 Thanks to all of you who attended, supported the cause, came out in the rain, carried the banner and helped make our voices (and our opinions) heard!
Unfortunately turnout was low - there were probably only about 50 people total. But the Democrats Abroad did a good job organizing everything and it was fun to listen to the singer and hear the speeches.

Join Democrats Abroad and others  for the fourth solidarity sister Women’s March with Washington DC. This year in an effort to branch out beyond the United States and embrace women in Germany and further… Our theme will be women at the workplace. 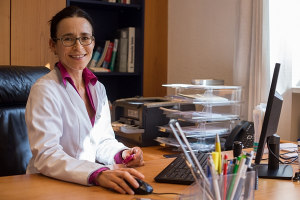 Our speaker for January is Dr. Dorit Maoz, who will talk about her work with Doctors Without Borders. Dr. Maoz is a general practitioner in Untermenzing whose areas of specialization include diabetology, travel medicine and pain therapy. She studied medicine in Heidelberg from 1992 to 1998. Working subsequently in various capacities in Bavaria as well as Scotland, Dr. Maoz gained expertise in areas ranging from emergency medicine, internal medicine and pediatrics to surgery and pain therapy. Certified as a general practitioner in 2005, she went on to obtain additional qualifications in pain therapy and diabetology before earning a master’s degree in International Health from the University of Basel in 2016. Dr. Maoz first became involved with Doctors Without Borders in 2005. To date, she has taken part in seven missions — in countries including Nigeria, Kashmir/Pakistan, the Democratic Republic of the Congo, Chad and the Ivory Coast. The missions have addressed major health issues such as children’s nutrition, cholera, HIV/Aids and ebola. In sharing some of her experiences and insights with us, Dr. Maoz will focus on two of the missions she has participated in.
For more information, please contact our club president at: info@aaupw.de
**** 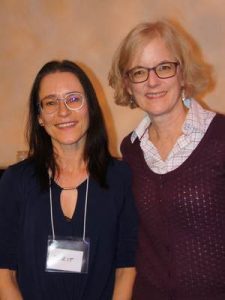 Many thanks again to Dr. Dorit Maoz from Doctors without Borders for her very interesting and insightful presentation. She told us about her various missions, particularly her first one to Nigeria to combat malnutrition, about the disease itself and about the internal workings of the organization.
Thank you Dona Schlimm for organizing everything and to Pat Biondo who originally suggested the idea.
If you have an idea for a program meeting, please don't hesitate to contact the Program Committee and let them know. 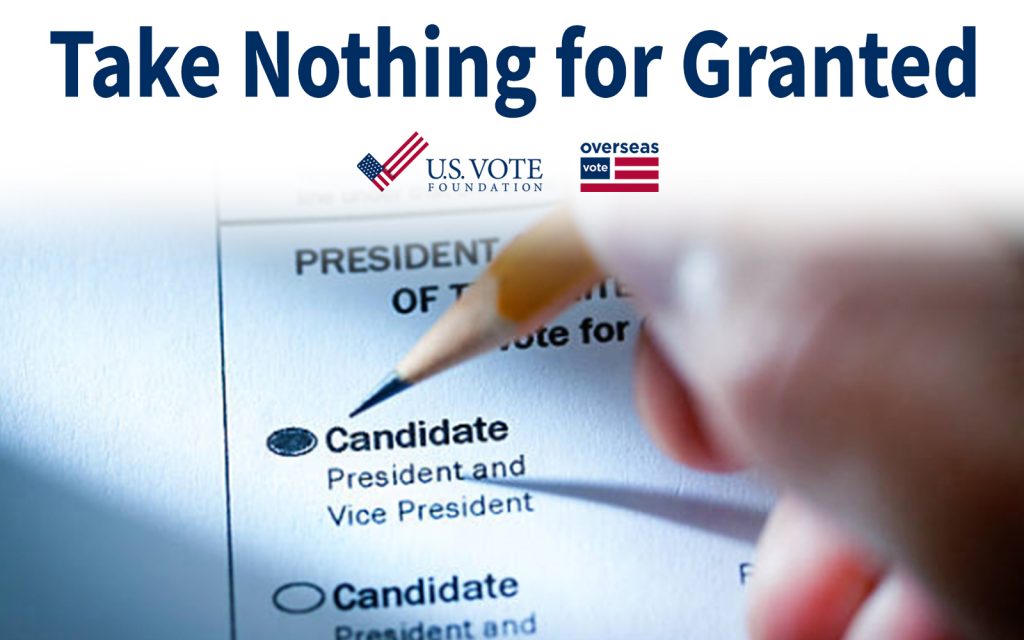 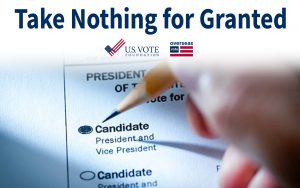 Being an active voter means never taking your rights or your current status on the voter roll for granted. Choosing which candidate is your party's nominee is the most crucial decision of the 2020 election. Make sure you weigh-in with your vote.

Make this a "no surprises" voting year and take the following steps on the U.S. Vote Foundation (US Vote) or Overseas Vote site - whichever suits you best:

U.S. Vote Foundation (US Vote) and Overseas Vote are excite

The German-American Women's Club of Munich e.V. has started selling tickets to their Magnolia Ball which will be held at the Hotel Bayerischer Hof on Friday, January 24 starting at 8 p.m. Doors open at 7 p.m.

The Gala Program for the Charity Ball includes a silent auction, charity raffle, a champagne reception and the opening dance by the debutantes and debutants. More information and ticket are available here. 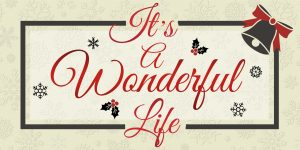 Do you long for the simpler days, especially at Christmas time where life seems so hectic that you just want to take a break? Than tune in to the first-ever live worldwide broadcast of Entity Theatre’s production of  It’s a Wonderful Life on Saturday, December 14th at 8 p.m. CET.
Summary:

It’s Christmas and that means it’s time, once again, to travel back to everyone’s favorite small town — Bedford Falls — where guardian angels are real and wishes come true!

Come join us for a night of Christmas carols and live sound effects, as our ensemble cast brings to life the story of idealistic George Bailey, who spent his entire life giving up his dreams for the good of his town. This live 1940s radio broadcast is an adaptation by Tony Palermo of the beloved American holiday classic It’s a Wonderful Life by Frank Capra. The play is directed by Jim Nellis is produced by Viviana Ghiglione and Bernd Plank. Our own AAUPW member Susan Voight is in charge of costumes for this show, too.  Both performances are already sold out, but follow the link below to tune in live.

Mark your calendar for Saturday December 14th at 8pm CET  and tell your friends to join in, too! 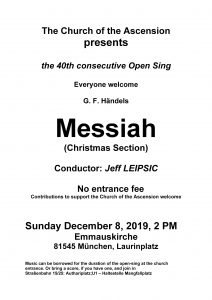 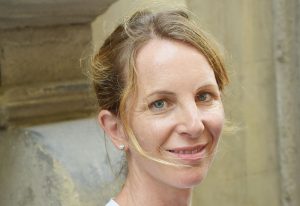 We are looking forward to hearing from Ursula Heinz, who will be speaking to give us a basic understanding of the evidence and the benefits of a whole-food plant-based lifestyle. Ursula grew up in Vienna and graduated from medical and dental school in Vienna. She has been practicing orthodontics, following a residency in San Diego, California. She has also spent the last eight years focusing on healthy nutrition, a healthy gut and a sustainable lifestyle. In the past decade, she and her family have lived in Louisiana and in Queensland, Australia, and they have just recently relocated to Munich. Being a physician, it was always my intention to help other people switch to a healthy lifestyle. A few years ago, I started the blog http://www.plantbasedhappy.com and http://www.plantbasedhappykids.com, and have published the book "Stella's Whole Food Plant-Based Family Cookbook", which will be available next year in Germany through the GU Verlag. Last year Ursula successfully launched the company http://www.activatedme.de producing activated nuts and seeds. She also gives lifestyle change workshops in Munich (www.plantbasedhappy.de).

For more information, please contact our club president at: info@aaupw.de 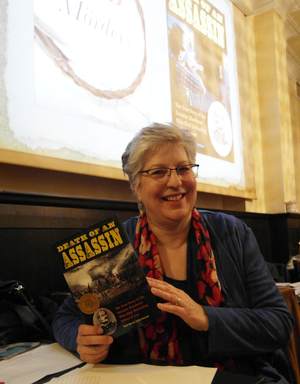 Everyone attending our Program Meeting on Wednesday, October 16th  was fascinated by our speaker Ann Marie Ackermann and her presentation of her book 'Death of an Assassin'.  Ann Marie presented the murder, the criminal case, the forensic evidence and left us hanging! She was amazing - pacing back and forth, as if we were the jury.  The only thing left for us to do was to buy her book!  Enjoy! 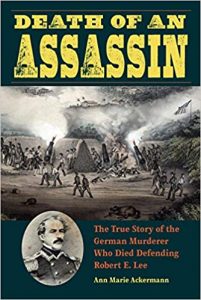 Our speaker in October will be Ann Marie Ackermann - author of the true crime book 'Death of an Assassin'.  Ann Marie Ackermann is a former attorney with focuses on criminal and medical law. Eighteen years ago she moved to Bönnigheim, Germany, the town in which the assassination occurred, and is a member of its historical society. Ackermann’s intimate knowledge of the town and of the German language enabled her to bring the German and American sides of this story together. She has a number of academic publications in law, ornithology, and history.

For more information, please contact our club president at: info@aaupw.de