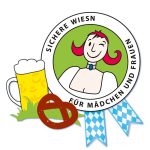 A look at Sichere Wiesn and how its grown

Sichere Wiesn was set up to help women who have lost their friends and don’t know where to go, are being stalked or harassed, have been sexually assaulted, or just need a safe space to get away from the madness.

Since its modest beginnings, this organization has grown its reputation and influence despite resistance from the Oktoberfest organizers (read: breweries). They don’t want to admit that while Oktoberbest is fun for most, this huge event also presents safety problems every year, especially for girls and women.

Kristina Gotlöber, the Sichere Wiesn director, gave me some interesting background on the organization. In its first year (2003), it helped 28 women. Last year, it assisted 216 – a huge jump. That shows that more people know about the check point and are not afraid to go there for help. Some of that awareness comes from the flyers we distribute to tourist hotels each year.

Some more interesting facts from last year: Of the 216 girls and women who sought help from Sichere Wiesn, 9 had experienced or been threatened with sexual assault; 9 had been physically assaulted; 127 had lost friends or valuables (handbags, mobile phones, hotel keys) and were not able to get back home without assistance. In addition, there were 35 cases of alcohol abuse and 36 “other” cases, such as psychological crises and traumatization.

The oldest client at the Sichere Wiesn last year was 72, the youngest 15. The vast majority are under 30.

Interestingly – and this is one more reason to support this great cause – the largest single group of clients was American women! Some 41 Americans got assistance from Sichere Wiesn in 2016. More than half of all of its clients are foreigners (121), and the counselors speak English half of the time.

To raise awareness among young women and men about Sichere Wiesn, Kristina and her colleagues conduct the „Pausenhofprojekt“ every year. They go to schools around Munich and do presentations about safety on the Wiesn. Since starting this project a few years ago, they have been to 16 schools and reached out to 3,000 girls and 2,400 boys.

Kristina expects an even larger number of clients this-coming October, both due to rising awareness – there was even an article in the Süddeutsche Zeitung about it! – and the fact that the Wiesn is one day longer.

If you want to learn more about Sichere Wiesn, check out the website, or better yet, drop by the check point during one of its open houses. It will have two of them during the Oktoberfest – dates and times to be announced. I will update everyone about it in the Evite.
After the Wiesn, there will be a formal celebration at the Rathaus, and, as a long-time supporter, we’ll be invited to join. More details coming.