The next book club meeting will be Wednesday, September 13th at 7pm. We will be discussing the following  books this fall: 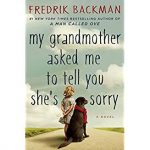 Our first book for the September meeting: My Grandmother Asked Me to Tell You She’s Sorry  is a charming, warmhearted novel from the author of the New York Times bestseller A Man Called Ove. It is a story about a seven year old girl and her seventy-seven year old grandmother, life and death and the right to be different.

Our second book: The History of Bees, A Novel by Maja Lunde.
In the spirit of Station Eleven and Never Let Me Go, this dazzling and ambitious literary debut follows three generations of beekeepers from the past, present, and future, weaving a spellbinding story of their relationship to the bees—and to their children and one another—against the backdrop of an urgent, global crisis.   England, 1852. William is a biologist and seed merchant, who sets out to build a new type of beehive—one that will give both him and his children honor and fame.   United States, 2007. George is a beekeeper fighting an uphill battle against modern farming, but hopes that his son can be their salvation…

For more information, contact our club president at: info@aaupw.de