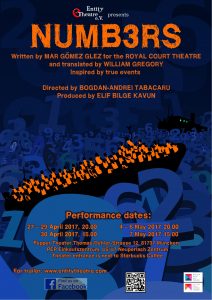 Entity English Theatre’s 2017 spring production is the European premiere of “Numbers,” originally written in Spanish by Mar Gómez Glez for the Royal Court Theatre in London, and translated into English by William Gregory.

In 2009, the crew of the Spanish shrimp trawler Francisco y Catalina rescued 51 migrants drifting aboard a sinking raft in the Mediterranean Sea. The crew and refugees were denied access to the Maltese port of Valletta and were left stranded. They struggled to survive as food, water, and patience quickly dwindled. Meanwhile, diplomatic efforts were made to resolve the situation while the matter was hotly debated by the public and media.

“Numbers” is based on the events which transpired while the vessel was stuck in diplomatic limbo. It is a political play. It’s serious, it’s satirical, it’s deep, yet it is also humorous.