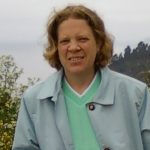 April’s speaker will be Claudia Clark, author of MY PARTNER, MY FRIEND The Relationship between U.S President Barack Obama and German Chancellor Dr. Angela Merkel. The book explores how the relationship between Barack Obama and Dr. Angela Merkel evolved from one of extreme apprehension to one of deep friendship and a partnership that captivated the world, and why their partnership is so important to today’s world leaders – the transformation of their relationship exemplifies how it is possible for political adversaries to establish a bond of trust, respect, and even friendship.

Clark received her BA in History and Public Policy from Michigan State University, where she served as President of the College Democrats and was active in Amnesty International, NOW, and Pro-Choice groups. She holds an M.A. in Labor and Industrial Relations from the University of Illinois at Urbana-Champaign, a Masters in U.S. History with an emphasis on women’s history from San Jose State University, and an MSW from the University of Michigan with an emphasis in Community Organizing.

Clark has worked on numerous political and social justice campaigns, including serving as a campaign manager for a school bond measure for the South San Francisco Unified Schools Campaign; a community organizer with ACORN; a field organizer for the South Bay Labor Organization, San Jose, CA; and a field organizer for the South Dakota Campaign for Healthy families. Her volunteerism includes many Democratic Party organizations, NAACP groups, Planned Parenthood affiliations, and Toastmaster’s International.

Clark and her husband recently moved from San Jose, California, to Landshut, Bavaria, Germany where she was recently elected as the national, Get OutThe Vote Coordinator (GOTV) with the Democrats Abroad Germany Chapter. She is currently conducting research for her next book about West German families who were separated by the Berlin Wall during the Cold War. Website: claudiaclarkauthor.com

For more information about joining AAUPW or attending a future meeting, check out How to Join or contact our club president at: info@aaupw.de